Lily of the Valley – Convallaria majalis

LILY OF THE VALLEY
Convallaria majalis 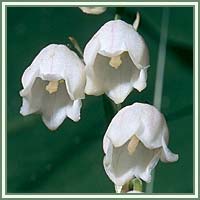 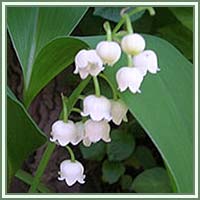 Common name: Lily of the Valley
Latin name: Convallaria majalis
Other names: Convall-lily, Convallaria, Jacob’s Ladder, Lily Constancy, Ladder-to-Heaven, May Lily, Our Lady’s Tears, Male Lily
Family: Lilaceae, lily family
Habitat: The plant is native to the cool climate of the Northern Hemisphere. Lily prefers well-drained, rich and sandy loams.
Description: Lily of the Valley is a herbaceous perrenial plant. It has a creeping rhizome, and a quill-like shoots emerging from a scaly sheath. Two glossy leaves are rising directly from the rhizome on long, narrowing foot-stalks, one leaf often larger than the other. Flower-stalk, usually leafless, has white, hanging, bell-shaped flowers. Flowering occurs from May to June. By September, the flowers are developed into scarlet berries.
Parts used: Whole plant, collected while in flower and dried.
Useful components: The plant contains two useful glucisdes, convallamarin and convallarin.
Medicinal use: Lily of the Valley is widely recognized as a cardiac tonic and diuretic. It is used in cases of valvular heart disease, cardiac debility and dropsy (it is usually recommended as a Digitalis substitute). It has strong diuretic properties, reducing blood volume and lowering blood pressure. It is also useful in treatment of chronic lung problems such as emphysema. A decoction of the flowers is useful in removing obstructions in the urinary canal, and it has been also recommended as a substitute for aloes, due to its purgative quality.
Safety: The plant shouldnt be used in combination with heart drugs called beta blockers and calcium channel blockers and lanoxin. Do not use the plant without consulting your doctor.