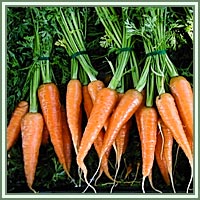 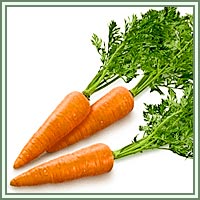 Common name: Carrot
Latin name: Daucus carota subsp. sativus
Other names: Carota, Carotte
Family: Apiaceae
Habitat: Carrot is a domesticated form of the wild carrot, native to Europe and southwestern Asia.
Description: Carrot is a root vegetable, usually orange in colour, though purple, red, white, and yellow varieties exist. It has a crisp texture when fresh. The most commonly eaten part of a carrot is a taproot, although the greens are edible as well. It is a biennial plant which grows a rosette of leaves in the spring and summer, while building up the stout taproot, which stores large amounts of sugars for the plant to flower in the second year. The flowering stem grows to about 1 metre (3 ft) tall, with an umbel of white flowers that produce a fruit called a mericarp by botanists, which is a type of schizocarp.
Useful components: Wild carrot seeds contain flavonoids, and a volatile oil including asarone, carotol, pinene, and limonene. Cultivated carrot root contains sugars, pectin, beta-carotene, vitamins, minerals, and asparagine. Carrot leaves contain significant amounts of porphyrins, which stimulate the pituitary gland and lead to the release of increased levels of sex hormones.
Parts used: Root, leaf and seed
Medicinal use:  According to the clinical reports, beta-carotene can significantly lower the risk of heart attacks and strokes in women. Carrots are used in herbal medicine, to treat problems such as intestinal parasites, persistent diarrhea, different digestive problems as well as high cholesterol problems. The most beneficial effect of eating carrots is perhaps in its ability to improve eyesight and to help in the maintenance of visual acuity; this effect has been confirmed by scientific research. Carrots possess large amounts of the vitamin A, which is a source of retinal, the compound that combines with different proteins to form the visual pigments found in the retinal rods and cones – the main visual receptors in the eye. Carrot also has great diuretic properties – carrot based herbal remedies have been used to counter disorders such as cystitis and stones in the kidneys and gallbladder. Carrot seeds possess a diuretic and carminative effect on the body. The seeds and the leaves can be used as an herbal remedy to bring relief from flatulence and gassy colic; these two also form an effective remedy for settling the digestive system and to quite down stomach complaints.
Safety: Overconsumption of carrots can cause carotenosis, a benign condition in which the skin turns orange. Consult your doctor before consumption of any herb.